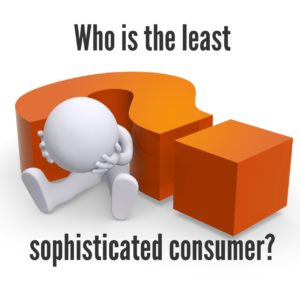 You’ve fallen behind on bills and get a debt collection letter from a lawyer.  The letter says that if you don’t pay a $75 medical bill you will be sued. You’re a pretty smart guy and you know that the lawyer is just blowing smoke – he’s not really going to sue you for $75 because it’s such a small amount.  Turns out you were right and the lawyer never sued you.  In fact, it’s pretty clear the lawyer made a false threat, but you never believed him anyway.

Is it ok for a debt collector to make a false threat, even if you knew it was false?

If a debt collector has engaged in what you to believe to be false or misleading conduct, even if you don’t believe it, the conduct might have still violated the FDCPA.  The question is not were you fooled, but would the least sophisticated consumer have been fooled.  To find out, contact a consumer protection attorney familiar with the FDCPA.

The FDCPA includes a private right of action under which a consumer may sue a debt collector for FDCPA violations.  If a debt collector is found to have violated the FDCPA, you may recover up to $1,000.00 in statutory damages, plus actual damages (for example pain and suffering) and your reasonable attorneys’ fees.

The FDCPA empowers the consumer to swing the pendulum in the other direction and sue the debt collector for its wrongful conduct.