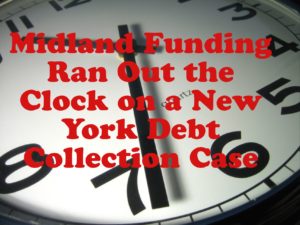 Infamous debt buyer Midland Funding, LLC files thousands and thousands of debt collection cases in New York every year.  Midland and its attorneys are often accused of being sloppy in how they handle such a high volume of cases.  One recent case in Wayne County New York illustrates this sloppiness.

Under New York court procedure, a plaintiff has 120 days from when it files its lawsuit to serve the defendant with the summons and complaint.  Failure to do so will result in dismissal – a fatal consequence if the statue of limitations on the plaintiff’s claims have run out. For this reason, a court can extend the 120 deadline for “good cause and the interest of justice.  Good cause requires a ‘threshold’ showing the Plaintiff made reasonably diligent efforts to make timely service”.

In this case, hot on the heels of its successful transfer motion, what “reasonably diligent efforts to make timely service” did Midland make?  Apparently none – according to the Court, “we do know the length of delay in service. Relative to the promptness in making this request for an extension, the initial 120 day period expired on July 13, 2013. This application was not filed until May 11, 2015; two months shy of two years late.”

For this reason, the Court dealt a fatal blow denying Midland Funding’s request to extend the time to serve the Summons and Complain on the Defendant delivering an unexpected victory to the consumer.