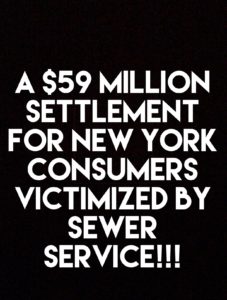 As reported in the NY Times on Friday, November 13, 2015, a class of approximately 355,000 New York consumers victimized by the fraudulent debt collection practice of sewer service will receive $59 million in a class-action settlement that also bars a major network of debt collectors from continuing the unlawful practice.

The lawsuit alleged claims for violations of the Fair Debt Collection Practices Act (FDCPA), The Racketeer Influenced and Corrupt Organizations Act (RICO), and New York Unfair and Deceptive Acts and Practices Laws. The case was brought on behalf of consumers by MFY Legal Services and New Economy Project.