What is the Debt Collection Statute of Limitations in New York? 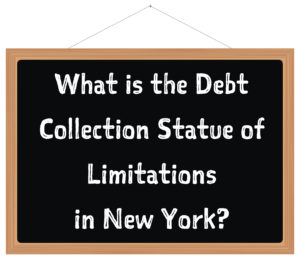 A debt collector has been sending you letters, calling you on the phone and may have even sued you.  It’s been like pulling teeth to get the debt collector to explain what the debt is and where it came from.  As it turns out, the debt collector is not the company that originally extended you credit, it’s a debt buyer who now claims to own the right to collect the debt from you. You are perplexed because the debt they claim to have bought is old, really old, so old that you have forgotten about it.  The question is – how old is too old for them to collect?  What is the debt collection statute of limitations in New York?

Federal debt collection laws called the Fair Debt Collection Practices Act (FDCPA), regulates the collection of consumer debts.  The FDCPA precludes third party debt collectors from using false, misleading, deceptive and harassing debt collection tactics.   Suing on a debt that is beyond the statue of limitations is a violation of the FDCPA.

If a debt collector violates the FDCPA, you can sue for statutory damages up to $1,000.00 plus actual damages (like pain and suffering) and your attorney’s fees.

If a debt collector has sued or threatened to sue on a debt which is beyond the New York debt collection statute of limitations, take a stand and fight back.  Such conduct might be a violation FDCPA.  In FDCPA cases, The Law Offices of Robert J. Nahoum, P.C. doesn’t charge our clients a penny out of pocket.