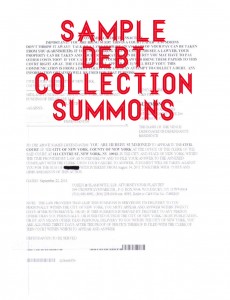 So you’ve just been served with a summons and complaint in a debt collection lawsuit.  Now what do you do?

By some estimates, 95% of debt collection lawsuits are won by default.  Often, the consumer failed to answer because he or she had no idea the suit had even been filed.  But the remaining consumers default for other reasons.  The result is the same, a default judgment.

If you’ve just been sued and are reading this article, then you are on your way to being among the 5% of consumers who do not lose by default.  First you must determine whether or not to hire a lawyer.  Sometimes the amount you’ve been sued for doesn’t justify the expense of a lawyer other times you just don’t have the money to pay for one.  Whatever the case may be, it is important to know that lawyers, especially those that focus their practice on debt defense and consumer protection, know the system and are much more likely to get you a positive result then going it alone.  Consumer lawyers know the courts, know the collection agencies and know the law.

If you must go it alone, the following steps may serve as a general guide of how to avoid default and preserve your rights.

The document used to respond to a complaint is called an “answer”.  An answer is a short statement that directly answers each and every the allegation made in the complaint with generally one of three responses: (1) “Admitted”, (2) “Denied”; or (3) Lack knowledge or information sufficient to admit or deny.

Complaints are usually enumerated and so your answer should also be enumerated with your responses matching the Complaint paragraph-for-paragraph. For example:

Once your answer is complete you must serve a copy on the attorney for the plaintiff.  The best way to do this is by delivering it via certified mail, return receipt requested.  Keep copies of the receipt and the “green card” when delivery has been confirmed.

Finally, you must file your answer with the clerk of court along with the proof of service.  To file your answer, take a trip down to the clerk’s office at the courthouse. Many courts have “pro se” windows where forms and instruction manuals are made available.

Once the answer is filed you have, for the time being, avoided default and begun to defend yourself.  However, answering the complaint is only the first step on the path to settlement, final disposition or trial. Keep in mind that if it ever gets to be too much for you and you become overwhelmed, it’s never to late to hire a lawyer.