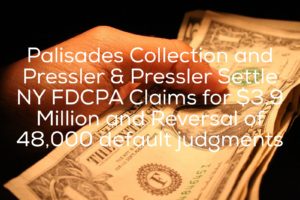 In 2014, a lawsuit was filed against New Jersey-based, publicly traded, junk debt buyer Asta Funding, its subsidiary Palisades Collection and their attorneys Pressler and Pressler.  The suit filed in the United States District Court for the Southern District of New York alleged violations of the Fair Debt Collection Practices Act (FDCPA), a federal law that regulates the collection of consumer debts and the U.S. Racketeer Influenced and Corrupt Organizations Act (RICO).

According to the lawsuit, Asta and Palisades bought millions of dollars of defaulted consumer debt from AT&T Wireless for pennies on the dollar and then, through Pressler and Pressler, filed mass-generated debt collection lawsuits throughout New York City without proper evidence of the debts.

It was alleged that the defendants had insufficient evidence that the debts were owed but still collected millions of dollars from consumes, in part, because consumer debtors seldom show up in court to defend the lawsuits resulting in default judgments.  With default judgments secured, Pressler could easily freeze bank accounts and garnishee wages.

The lawsuit was reportedly settled for $3.9 million dollars and a promise from the defendants to cooperate in the reversal of more than 48,000 judgments won against New York City consumers.

The settlement also calls for the defendants to pay $787,500 in attorneys’ fees to the consumers’ lawyers.

If you’ve been sued by Pressler & Pressler in a debt collection lawsuit, consider hiring a qualified attorney experienced in debt defense.  As with all debt defense cases, a good debt defense lawyer analyzes debt collection cases to determine if any violations of the FDCPA have occurred.  If a debt buyer or its attorney violates the FDCPA, you can sue for statutory damages up to $1,000.00 plus actual damages (like pain and suffering) and your attorney’s fees.  In FDCPA cases, a good consumer lawyer won’t charge clients a penny out of pocket.