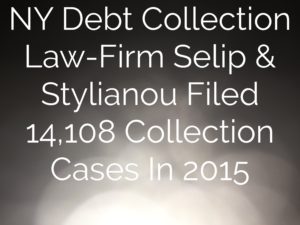 Selip & Stylianou represents some of the most active debt buyers including:

Selip & Stylianou, LLP and many of its debt buyer clients are notorious violators of federal debt collection laws known as the Fair Debt Collection Practices Act (FDCPA) and are sued regularly by consumers for these violations.  The FDCPA is a federal law that regulates the collection of consumer debts. It precludes third party debt collectors from using false, misleading, deceptive and harassing debt collection tactics.

Over the years Selip & Stylianou, LLP (when it called itself Cohen & Slamowitz) had been on the receiving end of countless FDCPA lawsuits, Attorneys General lawsuits, regulatory and governmental actions.