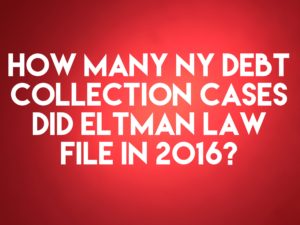 Eltman Law represents creditors and debt buyers who buy portfolios of old debt from banks, credit card companies, hospitals, doctors, cell phone companies and car companies for pennies on the dollar and then sue for the full balance.

According to the New York State Unified Court System, Eltman Law filed only 3 new New York debt collection lawsuits in 2016.  Despite this extraordinary low number of filings, Eltman Law remains a very active debt collector in other states and still in New York pursing judgments awarded years ago, to debt buyers and other law-firms.

Eltman Law has described itself as “judgment enforcement experts” so it comes as no surprise that old zombie judgments awarded to other lawyers would be transferred and revived by Eltman Law to try and collect.

While Eltman Law is a law-firm, in reality it is more like a glorified collection agency able to use the courts as a debt collection tool.  Once a judgment is obtained, law-firm debt collectors like Eltman Law can freeze bank accounts, garnishee wages and issue subpoenas.

Eltman Law is an alleged notorious violator of federal debt collection laws known as the Fair Debt Collection Practices Act (FDCPA) and is sued regularly by consumers for these violations.  The FDCPA is a federal law that regulates the collection of consumer debts. It precludes third party debt collectors from using false, misleading, deceptive and harassing debt collection tactics.