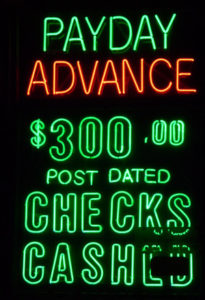 Many working people unfortunately live on the precipice of financial collapse.  A sudden medical issue, an unexpected auto repair or any other unforeseen expense could push a working family over the edge.  In a pinch, too many consumers in need of quick cash turn to cash advance loans to bridge the gap.

Also known as “Payday Loans”, cash advance loans are small, short-term loans with exceedingly high interest rates.  The loans are made with the anticipation of a future lump sum of cash or payment like a paycheck giving rise to the name “Payday loan”.  The payday loans are typically due in two weeks; however, because the borrower’s financial situation rarely improves in that short period of time, the loans are often rolled over into another two week loan.  Rollover of payday loans sets in motion a cycle of borrowing-rolling over-and borrowing while interest piles on at rates as high as 1000%.

WHAT YOU SHOULD DO

If a debt collector is attempting to collect on payday loan, take a stand and fight back.  Such conduct is against the law and may be a violation FDCPA.  In FDCPA cases, The Law Offices of Robert J. Nahoum, P.C. doesn’t charge our clients a penny out of pocket.