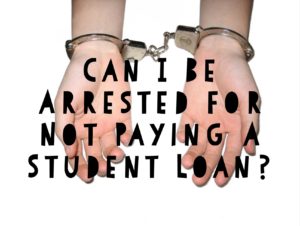 A story of a student loan debtor purportedly arrested for failing to pay his student loans has gone viral.  The media has ran with the story and student loan borrowers everywhere are nervous.  You may be wondering how this could have happened – didn’t we eliminate debtors’ prison in America in colonial times?  Well the answer is yes – but, debt collectors have powerful tools at their disposal that should not be ignored.

So, let’s first set the record straight on what happened.  This particular student loan borrower was sued after defaulting on his student loan.  He did not answer the lawsuit and a judgment was entered against him.  In an effort to discover the debtor’s assets, the debt collector ordered a deposition of the debtor. The debtor did not appear for the deposition and so the debt collector asked the court to issue a contempt order including arrest to compel the debtor to appear at the deposition.

This story is not unique. In fact, in New York, up to 94% of all debt collection cases end in default judgment. Much of those defaults are the result of sewer service, the practice common in debt collection cases where, a process server knowingly and deliberately fails to serve debt collection lawsuits against consumer defendants while submitting fraudulent affidavits to the court claiming service was made.

A default judgment is only a paper victory for the debt collector if it doesn’t recover any money from the debtor.  Where a debtor keeps his or her money or where he or she works is not readily apparent to the debt collector and so an investigation must be made.  These asset searches have the power of court subpoena behind them. Failure to comply with a subpoena may be a contempt of court.  In many states, the punishment for contempt of court includes arrest.

For example, in the state of New Jersey, if a judgment debtor served with an information subpoena fails to respond, the debt collector makes a “motion to enforce litigants’ rights” to the court asking that the debtor be arrested as a compulsion to answer the subpoena.  In practice, while motions like these are granted regularly by the courts, arrests almost never happen.

So, ultimately while it remains true that a debtor cannot be arrested for failing to pay a debt, failure to comply with a subpoena in a debt collection case can – in theory – subject a debtor to arrest as was the case of the student loan debtor in this week’s news.

Federal debt collection laws called the Fair Debt Collection Practices Act (FDCPA), regulate the collection of consumer debts.  The FDCPA precludes third party debt collectors from using false, misleading, deceptive and harassing debt collection tactics.  One of the explicit prohibitions in the FDCPA is the false threat that a consumer will be arrested for failing to pay a debt or otherwise threatening to take action that cannot be legally taken.

If a debt collector threatens arrest for failing to pay a debt, the consumer can sue for statutory damages up to $1,000.00 plus actual damages (like pain and suffering) and attorney’s fees.

If you need help settling or defending a debt collection law suit, filing for bankruptcy, stopping harassing debt collectors or suing a debt collector, contact us today to see what we can do for you.  With office located in the Bronx, Brooklyn and Rockland County, the Law Offices of Robert J. Nahoum defends consumers in debt collection cases throughout the Tristate area including New Jersey.