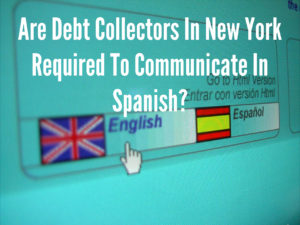 By some measure, debt collection agencies recover more than $50 billion a year in total debt from consumers.  New York State leads the pack in the highest total debt collection with around $5.4 billion per year.  With such widespread use of the Spanish language by so many Spanish speaking residents in the U.S., are debt collectors required to speak to consumers in Spanish?

Unfortunately, the FDCPA is silent on the issue of communicating with a Spanish speaking consumer.  However, because the FDCPA does preclude the use of false and misleading debt collection tactics, when a debt collector does communicate with a Spanish Speaking consumer, they must avoid providing false and misleading information.

With the FDCPA otherwise being silent on the issue of debt collection communications with Spanish speaking consumers, it is up to individual states and cities to protect further protect Spanish language speakers.

According to the 2011 census, nearly 50% of New York Metropolitan homes speak Spanish.  With such widespread use of Spanish here in New York, the New York Uniform Rules of Court require that in consumer credit lawsuit (including debt collection cases), the summons served must be printed legibly in both the Spanish and English language. Its purpose was to “afford Spanish-speaking residents of New York City a better opportunity to understand important legal notices in actions arising from consumer credit transactions” (Memorandum of State Executive Department, 2 McKinney’s 1970 Session Laws of New York, p. 2901). Its purpose was a commendable one, but provides little elucidation to the subject under discussion.

The plain and simple legislative intent of the bilingual summons requirement was to assure that our Spanish-speaking citizens would fully understand the legal papers which might be served on them as a result of some purchase on credit into which they had entered and in which they may well have been “taken.”  The unexpressed idea was that, hopefully, they should not be “taken” again by the myriad processes of the law.