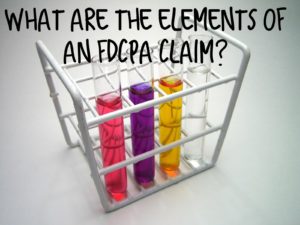 What must you proven to succeed on a claim for violations of the Fair Debt Collection Practices Act?

A consumer who brings a suit under the FDCPA must prove the following elements in order to successfully make out his or her claim:

(2) That the debt arises out of a transaction entered into for personal purposes;

Is the Plaintiff a Consumer?

The term “consumer” means any natural person obligated or allegedly obligated to pay any debt.  Thus, the term consumer includes natural people but does not include businesses.

Is the Debt a Consumer Debt?

To be a consumer debt covered by the FDCPA, the debt must be any obligation or alleged obligation of a consumer to pay money arising out of a transaction in which the money, property, insurance or services which are the subject of the transaction are primarily for personal, family, or household purposes, whether or not such obligation has been reduced to judgment.

So, under the FDCPA’s definition of a “debt”, only consumer debts are covered – not business debts.

Is the Defendant a Debt Collector?

The term “debt collector” means any person who uses any instrumentality of interstate commerce or the mails in any business the principal purpose of which is the collection of any debts, or who regularly collects or attempts to collect, directly or indirectly, debts owed or due or asserted to be owed or due another.

This definition includes any creditor who, in the process of collecting his own debts, uses any name other than his own which would indicate that a third person is collecting or attempting to collect such debts.

Explicitly excluded from coverage under the FDCPA are:

(A) any officer or employee of a creditor while, in the name of the creditor, collecting debts for such creditor;

(C) any officer or employee of the United States or any State to the extent that collecting or attempting to collect any debt is in the performance of his official duties;

(D) any person while serving or attempting to serve legal process on any other person in connection with the judicial enforcement of any debt;

Did the Defendant Engage in any Prohibited Conduct?

The FDCPA is a comprehensive statute that prohibits a catalog of activities in connection with the collection of debts by third parties.  Common FDCPA violations include:

The FDCPA gives consumers the power to turn the tables on the debt collector.  If a debt collector has used false, deceptive or harassing debt collection tactics against you, call a consumer attorney to see if you have a case.  If you do, you can sue the debt collector for statutory damages up to $1,000.00, actual damages (like pain and suffering) and best of all, the debt collector may have to pay for your legal fees.  This means an FDCPA case should not cost you a penny out of pocket.