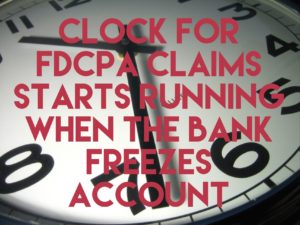 If a debt collector violates the FDCPA, it can be sued for statutory damages up to $1,000.00, actual damages (like pain and suffering) and the debt collection attorney may have to pay the consumer’s attorneys’ fees.

The FDCPA has a one year statute of limitations meaning that a claim against a debt collector that is brought beyond a year will be dismissed.  However, in order to determine if a claim is timely under the FDCPA, you must first know when that clock starts ticking.

It is generally understood that that one year FDCPA statute of limitations begins ticking at the time the violation occurs.  But what happens when the consumer was unaware of the debt collector’s unlawful conduct at the time it occurred?

The U.S. Court of Appeals for the Second Circuit was recently presented with this question and it’s answered clarified this timeline.

After the second improper bank freeze, Alexander Benzemann sued Houslanger & Associates for violating the FDCPA.  The suit alleges that Houslanger violated the FDCPA by using false or unfair means to collect a debt.

Houslanger & Associates moved to dismiss the FDCPA case on grounds that the one year FDCPA statute of limitations had run out.

The question before the court was whether the clock for claims under the FDCPA starts running when the bank freezes a debtor’s account or when the bank is served with the restraining notice?

In coming to its decision, Justice Pooler wrote:

“We see no indication in the text of Section 1692k(d) that Congress intended for the FDCPA’s statute of limitations to begin to run before an FDCPA plaintiff could file suit,” […] “We find it implausible that the Congress that passed the FDCPA intended to create such an anomalous result.”